Here in Monmouth throughout this winter of discontent, the True & Fair team have been busy listening to constituents of all ages including small businesses, the farming community and self-employed independent local businesses who are shuddering under the seismic cost and supply pressures that they are facing in an economic climate decimated by the Autumn episode of Tory chaos. 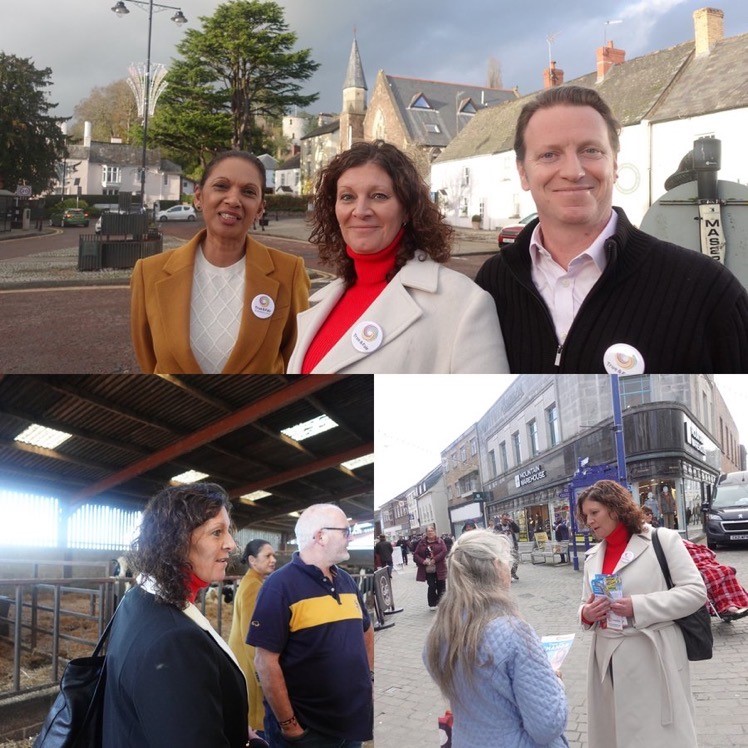 Those we have spoken to are especially concerned about the challenges facing young people of working age, and all generations are unanimous in their disgust with both the government and the main opposition parties’ resounding failures to call out corruption, and cronyism, citing the endemic failures of Westminster in delivering for local people including the traditional Tory voting farmers in Monmouth - https://www.newsleaf.com/campaigner-and-politician-gina-miller-says-farmers-have-been-neglected/

In 2016 Monmouth was a marginally remain-voting constituency, but there now seems to be a deeper shift by regretful Brexit voters and despair at the failure to plan for delivery of meaningful levelling up opportunities for those of working age to prosper.

This is evident from conversations with retailers in Monmouth town who are aghast by the imposition of a plan for regenerating Monnow street using an off-the-shelf 'greening, cafe-culture' scheme planned by consultants and presented as a done-deal, to spend levelling-up funding that ignores the needs of the business and residential community. Another example of large consultancies jumping on the levelling-up gravy-train funds? Expect protests and petitions in the near future on a high street near you!

We at the True & Fair party know that progress comes from grassroots involvement and informed decision-making by the people, for the people.

We will continue to campaign for levelling-up funds to be used wisely on a needs-basis here in Monmouthshire in the towns and in the farmland that is at the heart of our community. Schemes for regeneration should not be presented to stakeholders by planning consultants as a fait accompli off-the-shelf solution.

We must also support farmers to access sustainable farming scheme funds to embed our food security, and opportunities for the next generation to make regenerative farming pay. Here in Monmouth we should be enabling funding to save the Rivers Wye and Usk from environmental collapse and looking at best-practices, making it easy for farmers to innovate and grow to keep future generations of small farmers prosperous.

Until the phosphate crisis is solved, the moratorium on much-needed new homes will not be lifted, and we must work together across boundaries to make regulation work and investment effective to build new homes and invest in regenerative technology that will encourage enterprise and skills for the future.

Politicians and regulators such as Natural Resources Wales and Welsh Water need to work together to solve problems of slurry, sewage and inadequate infrastructure investment. As a grassroots challenger party, we will campaign relentlessly to make change happen. Recent reports of effluent and mains water leaks have led to a greater awareness of pollution and local communities suffered days without water and evidenced that decades of under-investment and limited joined-up thinking are causing real suffering in the local community. https://www.monmouthshirebeacon.co.uk/news/residents-without-water-for-days-slam-appalling-response-584439

Solutions lie in improved political leadership, joined-up thinking, and real investment in our infrastructure and environment. I will campaign for legislative reform and vote for the best interests of Monmouthshire in Westminster ensuring that the voices and views of all are represented to deliver change for the better here in Monmouthshire.

Misuse of public funds is one of the most emotive issues that we aim to tackle at True & Fair, and the evidence so far here is that Tory-leaning voters do not see Labour as the answer. https://www.thetimes.co.uk/article/tories-pin-hopes-on-wooing-back-millions-of-undecided-voters-0tckccp5s

Labour-leaning voters here who cannot stomach the Tories or the other main parties are feeling disenfranchised and increasingly leaning towards the values of True & Fair as a refreshing alternative, because our policies on political reform cut to the core of what is needed to transform an outdated political system that has failed the country.

The calls for proportional representation are at the centre of the demand for political reform that we at True and Fair will campaign relentlessly towards.

Shhh - don’t mention the B word!

Labour is sweeping demands from its local supporters to re-negotiate the not so oven-ready Brexit deal under the carpet. The refusal of Labour to shift from an entrenched 'Make Brexit Work' stance to a more pragmatic, sensible position is ignoring this constituency’s demands for a new deal to bring us closer to Europe.

Their entrenched position is a disgrace and demonstrates that it is a party stuck in a cycle of damaging malaise that will fail the country in the event that it sweeps to a majority in which it is not called to account. We need reforming voices in opposition to lead the calls for re-negotiating a deal to bring us progressively closer to Europe. https://www.theguardian.com/commentisfree/2023/jan/02/new-labour-government-promise-electoral-reform?CMP=Share_AndroidApp_Other

We are also hearing repeated stories of frustration from constituents concerning the moral and practical failure of the incumbent MP Mr David TC Davies who repeatedly parrots the party line on the failure of Welsh Labour to spend Westminster funding wisely to re-boot life into a flat-lining health service and save a social care system in dire straits. It is clear that blame is the name of the Tory game in the final months of this disastrous term of office.

We in Monmouthshire are all disappointed in the closure of local emergency response services and those of us who have had the misfortune to make the long trip to A&E this winter have witnessed needless suffering, which is traumatising for staff and patients.

The failure of elected politicians to deliver a fit-for-purpose health and social care service is complete and must be treated as a local and national emergency.

The reality according to the healthcare profession is that staff shortages are critical, there is desperate exhaustion caused by low morale, long hours and pay that does not allow decent living standards.

Patient suffering may be a by-product of longer waiting lists but is made much worse by an over-reliance on external agency staff to cover staff shortages due to sickness and failure to retain burnt-out nurses and doctors who are demoralised and unable to sustain the unbearable pressures alongside low pay and long hours. These systemic failures, caused by more than a decade of under-investment, are made worse by the supply chain breakdowns directly connected to the pandemic and Brexit in which medication and diagnostic services are scarce.

The attempt to deflect blame is a continuous feature of the gaslighting that Tory-leaning voters here in Monmouth are no longer prepared to tolerate. Labour is not considered to be the answer in the opinion of most voters we have spoken to, but we need your support to bring our policies to life in Westminster and deliver the change we need.

Join us and get in touch with me to support my campaign to get elected.

The True & Fair Candidate for Monmouth