As we enter 2023, we are one year closer to a major reckoning. The political chaos of the last seven years is not abating. The breaking news stories in just the first two weeks of the New Year are already being characterised by the all-too-familiar themes of political and democratic unaccountability, corruption, and incompetence.

Many of you will have seen the Sky and Tortoise Media Westminster Accounts Tool, revealing the many layers and methods by which money is flowing into UK politics, not just via MPs' second jobs, but from oligarchs and foreign states (as has already been revealed in relation to the Conservative Party), a vast network of vested interests and lobbying organisations, and opaque All-Party Parliamentary Groups (APPGs).

Gina Miller commented on these revelations in an article for The Guardian “How is it right that MPs are still free to receive money from lobbyists and second jobs?” 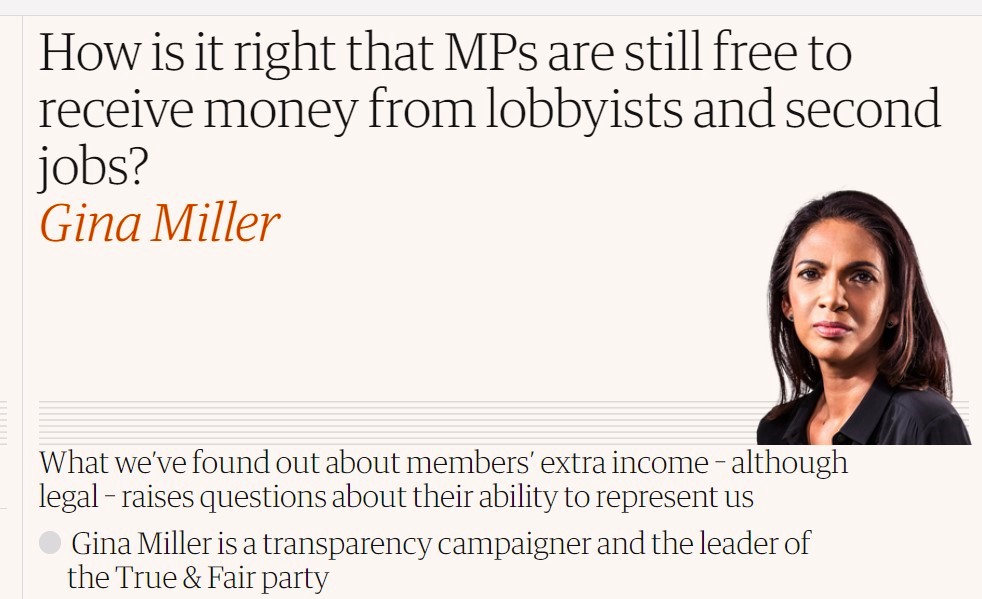 This story is yet more vindication of True & Fair’s core policy positions of cleaning up politics, modernising our democracy and fighting corruption, as a necessary prerequisite to fixing the economy, education, environment, the NHS, and other major issues facing broken Britain.

The fact that it has taken this long for MP Andrew Bridgen to have the Tory whip removed after referring to Covid vaccines as “the biggest crime against humanity since the holocaust”, even though he has seriously breached the Ministerial Code on numerous occasions in the past, is testament to how rotten the entire system in Westminster is. This now means that the number of Independent MPs sitting in Parliament due to having the whip removed is more than the number of Lib Dem elected MPs. True & Fair believes that if things are so serious that it results in the whip being removed, it should automatically trigger a by-election. We believe this is the only way of raising the calibre of our representatives in Parliament, and having the MPs that represent our voters' values, principles and best interests.

No Place for Complacency

Whilst many of us are now expecting the Conservatives to be removed at the next General Election, recent polling shows that a Labour landslide is far from inevitable. This specially commissioned MRP polling, which factors in more variables than standard polls, has shown that a hung parliament is more likely than has been predicted thus far. Other polling commissioned by the same organisation, Best for Britain, has found that one in three Tory voters have lost faith in Brexit, and yet Brexit remains the elephant in the room for most politicians.

All anti-Tory, anti-right-wing opposition parties must focus on the seats they are best placed to win, and remove the Conservatives. If opposition parties pursue a ‘winner-takes-all’ tactic, as they have repeatedly done in the past, including in 2019, to horrendous effect, it will weaken the overall force of opposition. Indeed, if Labour were to win a landslide, what effect would this volatile swinging of the pendulum have on the country, its stability and the chances of enacting major and necessary reforms? Majority swings from the right or left are not in the best interests of our country as the result is what amounts to performative politics.

Whilst many are pinning their hopes on a Labour government being a significant improvement on the current regime, this does not bode well for the longer-term health of our country. Under the current system, short-lived Labour governments are inevitably followed by longer-lived Conservative governments, and so we get history repeating itself.

If we truly believe that an eternity of Tory versus Labour, and its corresponding cycle of failure, is neither desirable nor inevitable, then the next election is the time to stand up and be the change. It is an opportunity to lend our votes to a new, bold, citizen-led, campaigning party with no baggage, conflicts of interest, or professional politicians. This is why we built the True & Fair Party. As a vehicle for change. For the politically homeless and disenfranchised who are no longer prepared to vote for the least-worst option at any given election. People who are no longer prepared to be complicit and participate passively in a system rigged for the benefit of incumbent parties, at the expense of new ideas, new challengers and a more open, diverse and dynamic system.

This is the year you have a real chance to speak up for real change, and give support to a genuine alternative, founded on three key policies: cleaning up politics, modernising our democracy, and fighting corruption.

Let's work together to bring about a brighter future, to send a message that broken Britain can be fixed, and that we are prepared to get stuck in to make it happen.