One of the City's biggest open secrets has been the dirty money swilling around.

Over the past 20 years, London has become the laundrette of choice for international racketeers, crooks and dodgy businessmen - not to mention the mates of a range of despots, including Putin - and it's seeped into almost every area of our national life, destabilising institutions such as our politics, press, companies and charities. That the two main political parties are now wringing their hands in disgust is frankly insulting when they have for so long been turning a blind eye in the interest of bolstering the 80% service economy, a large part of which is professional services.

The new-found rhetoric of this Tory Government to clean up the corruption has seen it perform a series of dramatic and unedifying U-turns and feet dragging in connection with reducing the timeframe for sanctioned individuals and companies from 18 months to 6 months, addressing companies listed on the London Stock Exchange, and a supposed register of property ownership.

Politicians have even named and shamed law firms, individual lawyers and businesses. But the fact is the anger is being addressed at the wrong people.

It is the leaders of both our principal political parties that we should be angry with. Over decades, they have failed to close loopholes, heed reports for their own departments and security services, in particular the Russian threat to our national well-being, or bring in robust legislation. The draft Economic Crime (Transparency And Enforcement) Bill has been sitting on the backburner for years, and is only now being turbo-charged by Russia's invasion of Ukraine. Rather than reacting in blind panic - and in belated response to public outrage - the UK now needs a properly thought out and planned legislative programme to restore us to being a country of high standards of probity, transparency and good governance.

This programme must include reforming the UK's corporate criminal liability laws, introduce further legislation to address the staggering increase in economic crime and fraud issues, overhaul the lax Companies House and Charity Commission rules and regulations, non-doms owning our media, encourage businesses to link ethics with economic crime, and ensure that so-called wealth creators behave properly to ensure we protect the security of our country.

Without a plan, we will end up with still more kneejerk and badly drafted legislation. For example, the Economic Crime Bill contains several 'get out of jail' clauses.

The register of overseas entities is envisaged as a deterrent when it comes to the acquisition of UK land for money laundering. A step in the right direction, but the Bill does not address how false information can be supplied to the register, and criminals can also hide behind nominee arrangements.

Even more worryingly, the Draft Bill contains a power allowing the Secretary of State to exempt individuals from key provisions of the new registration scheme, if doing so is 'in the interests of the UK’s economic well-being.' This is absurd in a Transparency Bill and fosters an environment where individuals who are generous to political parties will almost certainly receive preferential treatment.

If you doubt whether this would be likely, then I would ask you to query why the Government thought it appropriate to create the exemption in the first place.

We cannot undo all of it. But we can do a lot to clean up, clear out and expose the worst loopholes and institutional weaknesses. As Michael Gove once said, don't let the perfect be the enemy of the good. But this is far from good.

Whilst politicians from all parties are finally beginning to address these issues, campaigners like myself have been highlighting for decades the other elephant in the room: the ownership of our national assets. Put another way, when will our Government stop allowing the selling off to dodgy foreign buyers, of our key infrastructure assets and industries, sporting clubs and venues, and national treasures?

There are some quick fixes that we have put in place in the UK based on best practice from around the world. For example, we could widen the scope of unexplained wealth orders (UWOs) to bolster our money laundering (AML) defences, as the Criminal Assets Bureau (CAB) in Ireland, which has a high success rate in the use of UWOs, has been successfully doing. We also need more clarity on whether breaches of sanctions and new legislation will result in criminal prosecutions or civil proceedings, as well as stricter listing rules for companies raising money on the London Stock Exchange.

As the Russia/Ukraine crisis raises geopolitical risk and shifts our global security architecture, there are many questions now rightly being asked about our country's military spend - a spend that has been decreasing significantly over time and now stands at 2.3% of GDP. Who knew that you couldn't fight land wars purely with smart tech and drones, rather than boots on the ground - apparently not the Ministry of Defence? 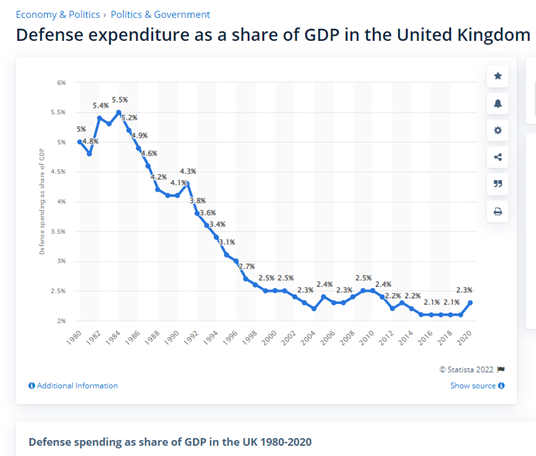 But these figures are not the true spend. The UK is meeting its NATO commitment to spend 2% of GDP on defence, but this is only because several years ago they started including several items of expenditure which it had not counted previously, such as pensions and contributions to UN Peacekeeping Missions. Strip these out and our UK defence spending falls well below 2%, compared to around 6% in the 1960s, 4.5% in the 1980s and 3% in the mid-1990, making it the lowest level of defence expenditure since the Second World War.

Defence of the Realm should be a priority for all political parties, including properly equipped armed forces. Against the backdrop of the world entering a new era of instability, we must review our domestic defence spend based on a considered assessment of geo-political risk and the force levels needed to deal with them, instead of the Treasury telling the MoD how much it can have. The first duty of any nation is its ability to protect its borders and citizens. We need to wake up and stop playing catch up.

In March 2021, the British government published “Global Britain in a Competitive Age: The Integrated Review of Security, Defence, Development and Foreign Policy”, which signalled a new integrated, consolidated approach to merging the Department for International Development (DFID) into the Foreign and Commonwealth Office to create a new Foreign, Commonwealth and Development Office (FCDO).

While the review was framed as a necessary response to a changing global landscape, domestic political considerations, and Brexit, it showed a UK government willing to be more competitive than collaborative with our global partners.

The steep cuts to the foreign aid budget and the abolition of DFID drew significant academic, policy, humanitarian and media objections, but for me it was a very worrying insight into the Government's broader strategy to redefine the UK's relations to the rest of the world, put up barriers, diminish our soft power and degrade our country as defenders of freedoms and democracy. At the time I was worried about the implications for poorer African countries but, since Russia's invasion of the Ukraine, it is the mass movement of people fleeing war, environmental crisis that we need to worry more about.

Defending our nation's security and stability at home, means supporting people wherever they are, and helping other countries cope with the inflows of people from their neighbouring countries. We have been through enough crises - most recently Afghanistan - and we really ought to be properly debating the economic challenges posed by Russia's war on Ukraine, and threat of a new Asia-pacific alignment as Ukraine has shifted the peace paradigm.